Use Jabber to monitor the load average, and other system statistics, on your machines. (Requires python-jabberbot.)

It will also show who's currently logged (according to /usr/bin/who) in when querried. 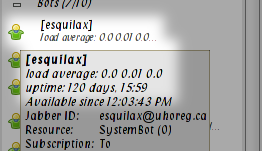 You can obtain the source code via git:

or browse the git repository.

Or you con download systembot.py, and a sample configuration file.

systembot is in the public domain. Do whatever you want with it.